Once a trademark registration has been issued, trademark owners should be on the lookout for the inevitable “Renew Your Trademark” scam letters. Here, to help trademark owners avoid these scams, we provide a breakdown of an actual scam letter that trademark attorneys at our law firm recently received for our registered tagline – FIERCELY LOYAL®.

However, before we get to the scam letter, some general information about our slogan and brand renewals might be useful. the FIERCELY LOYAL® The slogan and our mascot, “Jac”, the fiercely loyal black lab, were adopted by Chambliss after a survey of clients revealed that they thought one of the best traits of the firm and its lawyers was our fierce loyalty. (As a side note, we’ve successfully represented thousands of clients for years, many even decades, so we think the tagline fits.) 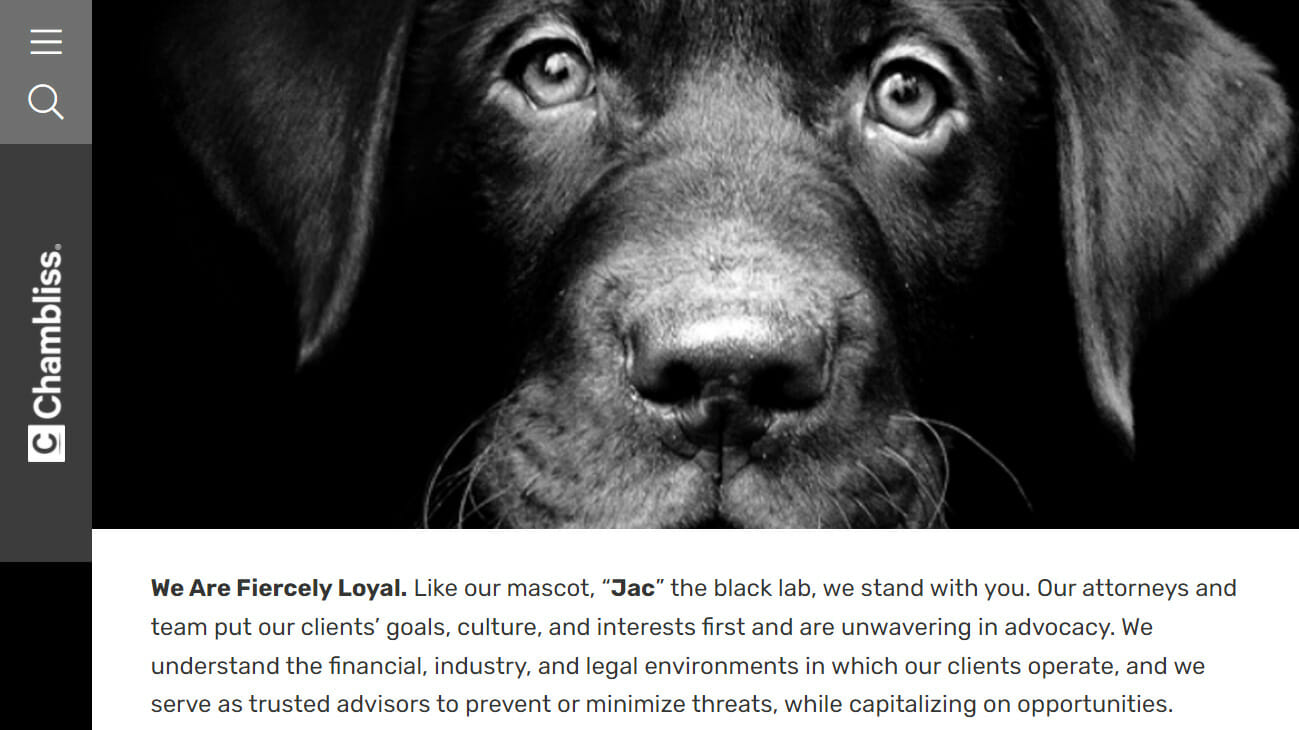 And as noted below, like any responsible brand owner, we have decided to federally register the slogan FIERCELY LOYAL. The company registered the slogan on January 28, 2014 under US Registration Number 4,476,244. You may or may not be aware that trademarks have a term of 10 years and must be renewed before the end of that term. The good news is that they can be renewed indefinitely, as long as the mark is still in use. So the registration date of January 28, 2014 mentioned above is important as it determines the next time our registration is due for renewal which is January 28, 2024. So keep this date in mind as it will be important soon. 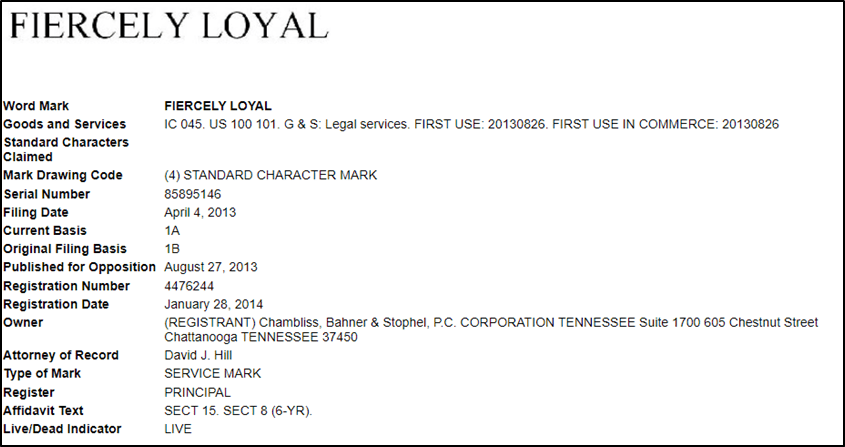 When we renew this registration, we submit a “Section 8 and 9[1]which is a combined document filed with the United States Patent and Trademark Office. This document includes (1) our declaration that we continue to use the FIERCELY LOYAL slogan and (2) our request to renew the registration for another 10 years. When this combined document is submitted, an application fee must be paid. Currently, this fee is $525 for each category of goods or services covered by the registration. Our FIERCELY LOYAL registration only covers one class (i.e. Class 45 for “Legal Services”), so our total fee to renew this registration will be $525.

Now let’s move on to the fraudulent letter.

Below is a copy of a “reminder” letter we recently received from the “Office of Patents and Trademarks”. Pausing here, note the official-sounding name, “Patent & Trademark Bureau.” The scammer deliberately chose this name to trick trademark owners into thinking it is a letter from the US Trademark Office. Spoiler alert – it is not. The official name – which appears on all official correspondence – is the “United States Patent and Trademark Office”, which is often abbreviated as “USPTO”. 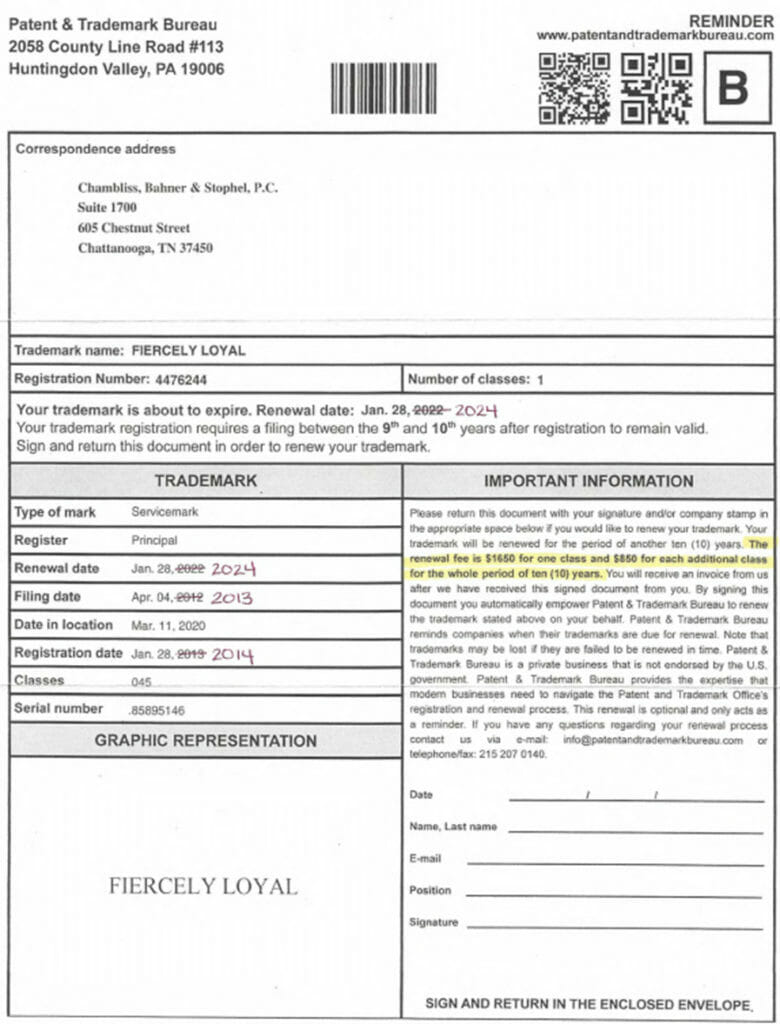 Then the letter reads: 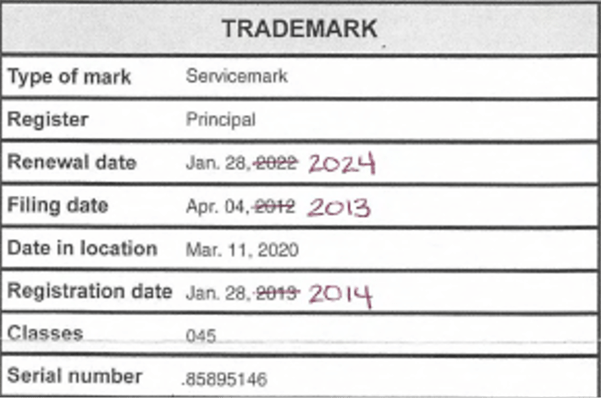 Scammers send these types of “reminder” letters early, so if the trademark owner has used a law firm for their trademark filings, the scam letter is received before the genuine reminder letter from the law firm is received. Then these scam letters often include fake renewal dates only to then rush brand owners to respond and pay for a renewal that is not yet required. Again, they’re hoping the trademark owners don’t speak with their lawyer first.

Then note the renewal fee of $1,650 for one class of goods or services, plus an additional $850 for each additional class. Remember that the filing fee for sections 8 and 9 is only $525 per class. And although we charge our clients to submit a Section 8 and 9 on their behalf, the amount charged is much lower than the amounts stated in this letter. By the way, we’ve seen other scam letters that quote fees of up to $4,000 per class.

These scammers are not all bad. But, at least they included a disclaimer in the last lines of the microprint, which indicates that they are not associated with the US government and that this renewal is only optional.

If you decide to send $1,650 to the Patent and Trademark Office, that’s where it’s headed.

[1] A brief aside – Before filing a Section 8 and 9 combined with the 10 year mark, a Section 8 statement must also be filed between the 5and and 6and year following the registration of a mark. In other words, halfway through a mark’s first 10-year registration term, a Statement of Continued Use (Section 8) must be submitted for the mark to remain registered for the full 10-year term. year. Therefore, only 10-year renewals are required.