A musical session takes the stage.

It promotes cultural tourism in the emirate and is part of the “Dubai Destinations – Dubai Art Season” campaign launched under the guidance of His Highness Sheikh Ahmed bin Mohammed bin Rashid Al Maktoum, Chairman of the Dubai Media Council.

The festival opened with a Vietnamese folk performance under the auspices of Vietnam Night in accordance with the Memorandum of Understanding signed between the Ministry of Culture and Youth of the United Arab Emirates and the Ministry of Culture, Sports and Tourism of the Socialist Republic of Vietnam for cultural cooperation, encompassing antiquities, heritage, arts and libraries.

This year sees the addition of Sikka House which features art installations and interactive spaces designed by Arhead, who specialize in content supported by augmented reality technologies.

From a private room inside Sikka House, the exhibition allows visitors to explore its exhibits and appreciate the work of digital artists, while touring the metaverse space. 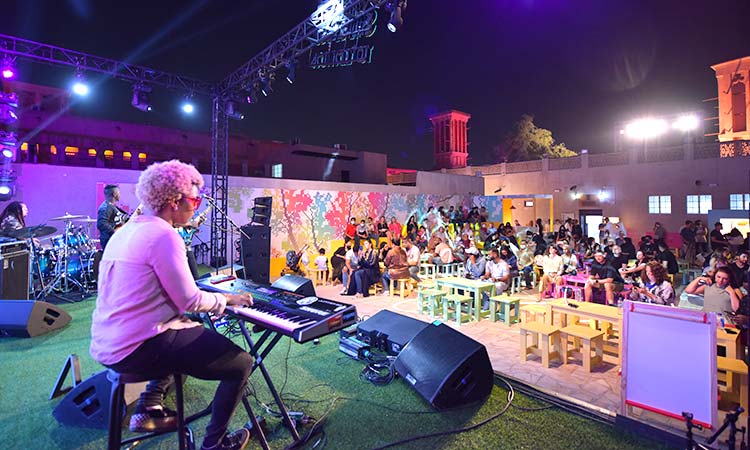 A musician plays all the right chords.

The AR exhibition covers the entire area of ​​the historic Al Fahidi district, where visitors can access it using QR codes.

Among the most important local Arab films is a screening of “Al Ayyala, a traditional performing art of the United Arab Emirates”, screened on March 22 with the support of the Ministry of Education. The film is produced by the students of the “Masterpieces” program and directed by Nayla Al-Khaja, the first Emirati director.

Other participating local films include the historical film ‘Khorfakkan’ and ‘Kahlek Shanab’, as well as a group of independent films, a screening of a Japanese film titled ‘The Kingdom of Dreams and Madness’ and a Saudi film titled ‘ Roll ’em.

Distinguished art activities include Puppetry with The Factory, an initiative by Palestinian puppeteer artist Fairouz Nustas. The Factory is a reflection of where and how puppets with different mediums are made. Visitors will learn how to make puppets, step by step, sketching, sculpting, costume sewing, coloring and makeup, the fun time of manipulating and bringing this creation to life.

The Animation Chamber is a collective work of artists Lina Younes and Azim Al Ghussein. It embodies the constant quest for story-driven collaborations and presents a space where worlds are created with one eye closed and the index finger like a wand.

From puppetry, animation, illustration and comics to film and performance, The Animation Chamber’s work is about suspending moments, replaying them, changing scripts, playing consequences , then repeat them. Impossible things happen in an instant; the objects vanish, come to life and start moving again.

Thanks to the “Digital Calligraffiti” project, digital calligraphy transforms the walls of the historic district of Al Fahidi into a painting of expression through a live exhibition of calligraphy.

Amal Anoohi’s Hopper Majlis is a place of gathering and conviviality, contrasting the heritage of the historic Al Fahidi district with the modern pieces of Studio Amal Anoohi’s Hopper collection. The project captures the essence of Dubai’s urbanity as a city of the future proud of its past.

Sikka also offers music lovers an ideal opportunity to enjoy a wide variety of live world music performances that permeate the evenings of the festival and entertain its visitors throughout the 10 days.

Musical experiences on the main stage of the festival include Emirati songs, Arabic songs accompanied by performances of oud and oriental instruments, pop music, music with eastern and western influences, rap poetry, jazz , indie and Indian pop, poetry nights and other popular tunes by artists of various nationalities and cultures.